Archaeologists in China have found the world’s
oldest playable musical instrument – a 9,000 year
old flute carved from the wing bone of a crane.
Los Angeles Times

Long before the Greeks measured to set
the frets on their lutes, dividing tight strings
by exactness of tones, long before that,

someone in China, probably a girl with time
and some need to walk alone near the sea,
lifted to lips the hollow wing bone of a crane

and blew through it, no thought of why,
mixing sky-air that lifts wings and sleeves
with the unseen source of life they call breath.

and drilled little holes where fingers could find
the tunes beyond birdsong they began composing.
How plaintive and lonely the wordless sounds

must have been – calling out thin, rising, then
drifting into and through the Bo leaves,
over rocks, like smoke in curtains and rafters,

vanished as softly as morning mist off the Yangtze,
like thoughts half-remembered. But the tunes lacked
grounding, sounds that tied light melodies down

to stone floor and soil and the warm flesh
of hands. Years later, long miles to the west,
high up and getting out of the wind,

against flat wood, later hollowed out ,
to make the kind of sounds for love or despair
that Athenian throats would utter if only they could.

The sweaty pluck and thrum of finger and hand
hefted earth tones struggling upward, rising to meet
the vibrato of long breaths ringing out of

that hollow wing-bone, and the melding created
dialogue, Greek harmony, music, sympathy,
a transcending of selves, a republic. 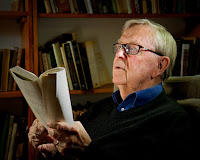 Born and raised in Michigan (1927) and a longtime resident of the Washington, DC area, Rod Jellema is Professor Emeritus of English and former Director of Creative Writing at the University of Maryland. Since he began work as a poet in mid-career at age 40, five books have been published:  Something Tugging the Line (1973), The Lost Faces (1978), The Eighth Day: New and Selected Poems (1985), A Slender Grace (2005), and his most recent book (which includes a CD), Incarnality: The Collected Poems (2010). He has also published two award-winning books of selections and translations from Frisian poetry: Country Fair (1985) and The Sound that Remains (1989). The father of three sons, married to the writer Michele Orwin, he is presently writing essays on the reading, writing, and teaching of poetry. Eleven of these essays have been recently published in three journals, Innisfree Poetry Journal, Poet Lore, and International Poetry Journal. He is at work on a book of such essays, Riding the Undercurrent.

Posted by Jacqueline Jules at 5:00 PM