Join us for our 3rd incarnation of A Splendid Wake as we continue our work of documenting poets and poetry movements in the Nation’s Capital from 1900 to the present. Our focus this vernal equinox is on Georgia Douglas Johnson and the “Saturday Nighters,” poet May Miller, the Federal Poets, Poetry Workshops born during “Poetry and the National Conscience” conferences, and the Modern Urban Griots.

Our stars this time around will include:  Regie Cabico, Host; Kim Roberts and Michon Boston on Georgia Douglas Johnson and the Saturday Nighters; Miller Newman on May Miller; Judith McCombs on the Federal Poets with Donald Illich and Dorrit Carroll; Linda Pastan and Rod Jellema on poetry workshops with Siv Cedering, Primus St. John, Roland Flint, and others; Toni Asanti Lightfoot on Modern Urban Griots with Brandon D. Johnson, Holly Bass and Twain Dooley; and Sunil Freeman, in the important role of Timekeeper!

Co-editor of Flicker and Spark: A Contemporary Queer Anthology of Spoken Word and Poetry and Poetry Nation: The North American Anthology of Fusion Poetry, Regie Cabico, our host, has received awards in National Slam competitions and for his work as slam coach for individual and team competitors in the U.S. and Canada. He is co-director of La-Ti-Do, a weekly spoken word and cabaret series in D.C.

Georgia Douglas Johnson—poet, playwright, and composer--brought together Kelly Miller and his daughter May Miller, Alain Locke, Carter G. Woodson, Angelina Weld Grimke, Langston Hughes, Jean Toomer, Zora Neale Hurston and many others at weekly salons at her home on S Street in D.C. Her life and works will be presented by Kim Roberts, a true D.C. force for poetry and the author of four collections of poetry, the editor of Beltway Poetry Quarterly, the anthology Full Moon on K Street, and by Michon Boston, a writer/producer and author of “Iola’s Letter,” a play based on the events that transformed Ida B. Wells from a journalist to a staunch anti-lynching activist. Boston’s plays have been produced at the Source Theatre, the National Black Theater Festival in North Carolina, and the Kennedy Center.

May Miller was a Washington poet, playwright and educator whose literary career began in the Harlem Renaissance of the 1920s. Her father, Kelly Miller, was a nationally known author and philosopher, dean of the College of Arts and Sciences and a professor of sociology at Howard University. He was the first African American to attend Johns Hopkins University where he studied astronomy. W.E.B. DuBois and Booker T. Washington visited their home. May spoke of having to give up her room for Paul Laurence Dunbar. An award May Miller received for a play was presented at a dinner attended by Langston Hughes, Countee Cullen, James Weldon Johnson and Jean Toomer. She served as chair of the Literature Panel of the D.C. Commission on the Arts and Humanities. Her niece, Miller Newman, will provide a picture of May Miller’s life. Miller Newman is a senior faculty member in the Department of English Composition and Reading at Montgomery College. She is a poet, essayist and aspiring novelist with a doctorate in Higher Education Administration.

The Federal Poets Workshop, founded in 1944, is the D.C. Metro area’s longest running workshop for poets. Members meet monthly at Tenley Public Library to critique poems and produce a biannual journal. Craig Reynolds, Frank Goodwyn, and Nancy Allinson have served as presidents. Don Illich is the current president. At least five workshops and two readings series have emerged from Federal Poets. Judith McCombs, Vice-President of Federal Poets since 2005, is a poet and literary scholar. Her poetry has appeared in many publications. The Habit of Fire: Poems Selected & New appeared in 2005. She directs the Kensington Row Bookshop Poetry Readings, edits for Word Works DC, and is on the Splendid Wake board. Don Illich, current head of Federal Poets, has published poems in The Iowa Review, Nimrod, and  Rattle. His poetry has been nominated four times for the Pushcart Prize. His chapbook, Rocket Children, appeared in 2012.  Doritt Carroll received her undergraduate and law degrees from Georgetown University. In Caves and GLTTL STP were published by Brickhouse Books and her poems have appeared in Poet Lore, Plainsongs and Journal of Formal Poetry.

Rod Jellema ran a series of conferences at the University of Maryland beginning in 1968, “Poetry and the National Conscience,” and sent letters out inviting folks to join a fortnightly writer’s workshop already in progress. Those who joined the existing group--Siv Cedering, Eddie Gold, Primus St. John and Bill Holland-- were Linda Pastan, Ann Darr, Roland Flint, Gary Sange, and Myra Sklarew. Other who joined occasionally were Elisavietta Ritchie, John Pauker, Henry Taylor.  “Notable sit-ins or drop-ins were Gene McCarthy, Bill Stafford, and Stanley Kunitz,” says Rod Jellema, who adds, “Ann Darr estimated that the members of the workshop published more than sixty books.”  Linda Pastan and Rod Jellema will reminisce about this workshop. Jellema, professor emeriti, University of Maryland founded the Creative Writing Program, and is the author of five collections of poems, the most recent, Incarnality: The Collected Poems. He is currently working on a history of early New Orleans jazz, Really Hot: A New Hearing for Old New Orleans Jazz.  Linda Pastan has published thirteen volumes of poetry, most recently Traveling Light. Two collections have been finalists for the National Book Award. A new collection, Insomnia, is due out from Norton in Fall 2015. In  2003, she received the Ruth Lilly Poetry Prize for lifetime achievement.

The way Toni Asanti Lightfoot tells it, The Modern Urban Griots got their start on a cold February night in 1994 at a place called “It’s Your Mug Cafe” at 2601 P Street, N.W. in Georgetown. She says that this series “had a broad impact. It influenced the establishment of numerous poetry events on U Street, N.W.  as well as Blackman’s Freestyle Union hip-hop workshops and created a commitment to community and education.” Those who participated included Brandon D. Johnson, Holly Bass, Twain Dooley, and Lori Tsang, among others. Beloved hecklers were The Brock Crew, Kenny Carroll, Brian Gilmore and Joel Dias Porter (DJ Renegade). The group performed at the Whitney Museum in NY, the Nuyorican, and smaller venues around the city. In recent times the group reunited at the Kennedy Center Millennium Stage. Toni Asanti Lightfoot, is a poet, educator, activist, and has an MS in Traditional Oriental Medicine. Her work has been anthologized and can be seen on YouTube. She is editor of Dream of a Word: A Tia Chucha Press Anthology.   Holly Bass, a Cave Canem fellow, writer and performer, studied modern dance and creative writing at Sarah Lawrence College and earned a Master’s degree in Journalism from Columbia University. In 2011, The Root and 2012 Best Performance Artist in Washington City Paper named her one of the Top 30 Black Performance Poets internationally. Brandon D. Johnson, founding member of Modern Urban Griots and The Black Rooster Collective, received a BA from Wabash College and a JD from Antioch School of Law. He is a Cave Canem Graduate Fellow, the author of Love’s Skin, Man Burns Ant, the Strangers Between, and has work published in numerous anthologies. Twain Dooley, born in D.C., served on active duty during Desert Storm, and after a 2-year stay in Guantanamo Bay, Cuba (as a civilian), returned to Washington and began to perform for a variety of audiences. Author of several books, he has opened for Amiri Baraka and Jimmy “JJ” Walker, won top honors on the DC/Baltimore Slam Team, and is currently working on the story of his life, “None of This Makes Sense.”

Founded in 1944, The Federal Poets are DC Metro-area’s longest-running workshop for poets—and the only one consistently open to newcomers. We meet afternoons on the third Saturday of the month, at the Metro-accessible Tenley Public Library, to exchange critiques aimed at enhancing a poem’s chances for publication. (Note: we have no current connection with the Federal Government, nor with state poetry societies.) You can read your one-page poem, with copies, at three meetings for group critique: and then be voted in for membership. (Or not, as happened once or twice.) 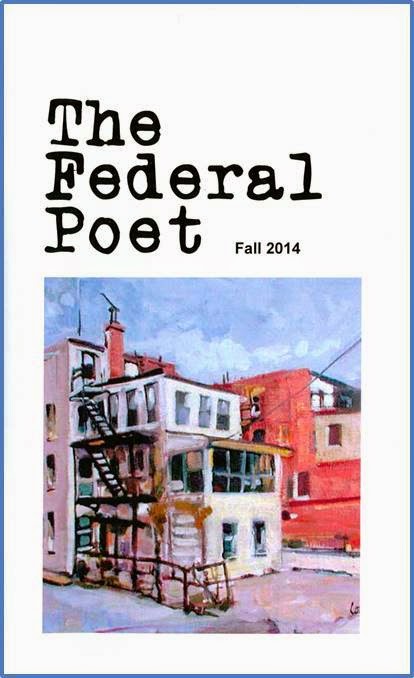 I have been a member since 1985, vice president since about 2005. I remember how much the Federal Poets’ welcome meant when I came to the area, uprooted from my long-term writers’ workshop and college teaching. I’ve stayed with Federal Poets to give back, to enjoy long-term and newer poet friends—and because the critiques and audience I get are good for my poems.

Craig Reynolds, a black gay activist poet, superb m.c. and organizer, was our president and editor till 1988; Craig arranged for us to read at Ford Theatre and Old Post Office Pavilion—the latter with Rod Jellema and Myra Sklarew as honorary guests (tribute Federal Poet Spring 1995). Frank Goodwyn, a novelist, memoirist, retired U. MD Spanish professor—and a cowboy poet—became president in 1989; followed by Nancy Allinson in 1992 as president, editor, and readings organizer; followed by Don Illich as president and readings organizer since September 2012.