It's that time of year for excitement, reflection and action, so  "Collective Voices" Poetry Ensemble is taking  time out to plan Poetry Extravaganza-2016. 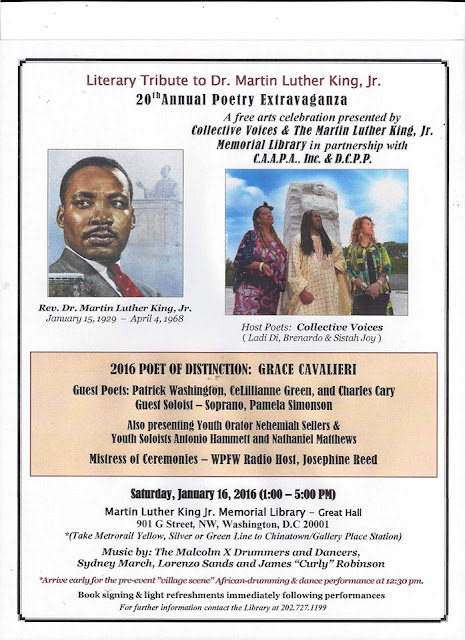 This year’s theme is "Bridging the Gap", and will be the main focus throughout the celebration.  We celebrate with Music, Dance, Song Prayer and Poetry.  The celebration will be hosted by WPFW's Radio Personality Josephine Reed and will start with drumming and dancing by The Malcolm X Drummers and Dancers, Ian Sydney Match, James Curly Robinson and Lorenzo Sands, along with others.  Our national anthem will be sung by soprano Pamela Simonson.  We must recognize the importance of filling the GAP between positive life sustaining entities such as our youth and elders, our people and our nation and various medias of Art and our artist.

Reflecting on Dr. King and his dedication, especially during times of challenge and controversy, we hope to attract the attention of our audience in order to form a better nation/world in which to live.  This is a family friendly event, free of charge and open to all.  We hope everyone will bring another, especially our youth and elders.

Along with "Collective Voices", there will be three featured adult poets, (CeLillianne Green, Charles Cary and Patrick Washington) and three youth presenters, Nathaniel Matthews (soloist), Antonio Hammett, (soloist) and Nehemiah Sellers, (orator).  Another highlight will be a presentation from Poet of Distinction Grace Caviler.  In addition there will be a special recitation of Dr King's speech by poet/orator Avery Tynes.

Oh what a gloriously planned day of enlightenment, encouragement and entertainment this will be, just the kick-start we need to help fulfill our resolutions for the New Year.  It's a Family Affair so, we hope to see our youth and elders there.  Plan to attend.

For all poets and writers, keep writing, keep sharing, keep using your God-given talents.  For all who have thought about writing, go ahead, give it a try, you might like it. at very least, you will always have something meaningful to do.  Poetry is my Passion!

As I reflect on Washington Writers’ Publishing House (WWPH), the D.C. based cooperative press, which has published more than 100 books of poetry and fiction since 1975, it’s become clearer than ever to me that an organization is the people who breathe life into it with their time and energy. With that in mind, I would like to remember some of WWPH’s strong, working contributors who are eligible for a splendid wake, stalwart authors who contributed generously with their get-up-and-go to the inner workings of the press, and who have now passed away.

I want to begin by mentioning Shirley Cochrane, who passed away on November 18, 2015. Shirley was living in Charlotte, North Carolina, under 24 hour care at the time of her death. She was the author of Burnsite, published in 1979. During the 80s and into the 90s, Shirley served as president, tirelessly checked the post office box, did order fulfillment, and attended press meetings until she moved away. Many thanks, Shirley; may you know our gratitude.

In 1979, WWPH published the anthology of D.C. Poets, The Poet Upstairs, edited by Octave Stevenson, longtime head of the Literature Division at the D.C. Public Library. In 1995, WWPH published another anthology titled Hungry As We Are, edited by Ann Darr, the author of Do You Take This Woman? I think it’s fair to say that anyone who volunteers to lead an effort to compile and edit an anthology, successfully seeing the project through to publication, has made a major contribution to Washington Writers’ Publishing House. 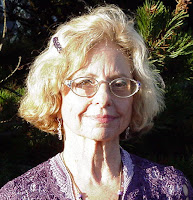 In the late 1980s into the 1990s, Barbara Lefcowitz, author of The Queen of Lost Baggage, coordinated manuscript reading for the poetry prize. Barbara, another member to recently pass away, having died on October 8, 2015, was very interested and energetic in her work for WWPH.

Barbara was energetic in her work, as was Elaine Magarrell, author of On Hogback Mountain. During the 1990s Elaine helped with major press undertakings, as well as with WWPH minutiae, whenever needed by then president Jean Nordhaus.

And here we ought to remember Ann Knox, author of Stonecrop, who managed production in the late 1980s on into the 1990s. Ann offered me sound advice on the subject when I came on board in 2004. 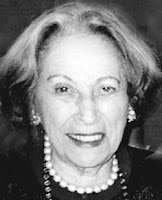 On the subject of advice, Faith Reyher Jackson, author of the novel Meadow Fugue and Descant, published in 2002, remained active in the life of the press until the end of her life by speaking up at meetings. When she couldn’t make it to meetings anymore, Faith remained involved by offering feedback via e-mail. Other WWPH authors no longer with us include May Miller, Margaret Weaver, and Paul Estaver.

I hope I have not missed any steadfast WWPH author who has passed away. I will close by mentioning two more authors. First, I remember distinctly the book launch in 1992 for The Dark above Mad River, by Joe Thackery, who was in his late seventies at the time of publication. From the podium, Joe said of his book, “This just shows it’s never too late.”

Lastly, I remember Robert Sargent, who early on served as president and for well over 10 years held the post of WWPH treasurer, thereby helping hold together a fledgling WWPH with his sage financial wisdom.

Remembering our friends from the past with all their contributions to our lives, I’d like to say how I take the title of Robert Sargent’s WWPH poetry book as another bit of his wisdom: Now Is Always the Miraculous Time. Many thanks to all of these folks (and those, too, still among us—working away) who helped get WWPH through all the years to this miraculous time.

Patric Pepper was President of WWPH from 2007 to 2013, and has continued volunteer service with the press. His poetry collection Temporary Apprehensions was a 2004 winner of the Washington Writers’ Publishing House Poetry Prize.
Posted by Jacqueline Jules at 5:00 PM 1 comment: