The Writer’s Center’s Assistant Director Sunil Freeman interviews E. Ethelbert Miller about the journal, which was founded in 1889 and is now published by The Writer’s Center. Miller and Jody Bolz have been Executive Editors of Poet Lore since 2002. 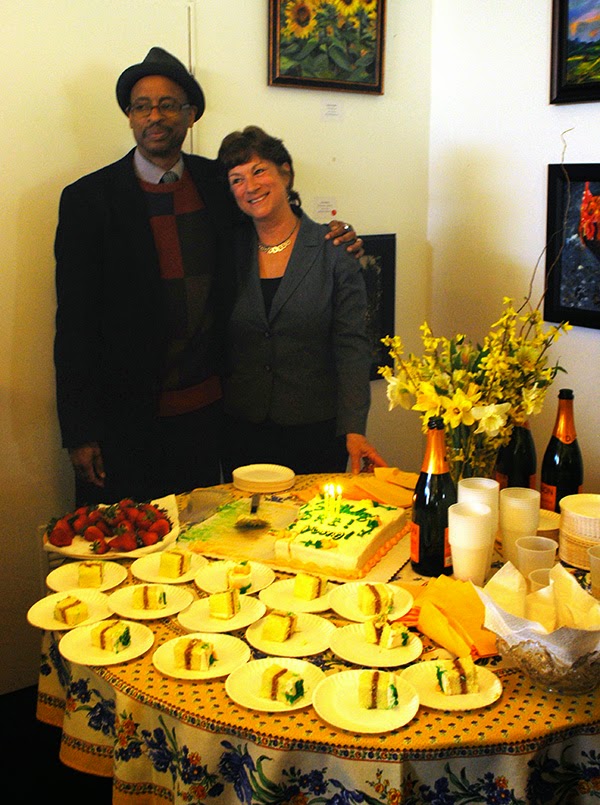 SF: You and Jody Bolz have co-edited Poet Lore for several years now. Have you seen any changes in the submissions you’re receiving, and the poems you are accepting for publication?
EM: I think we are seeing an increase in submissions. I believe the magazine is more “visible” to the literary community. One can find a Poet Lore table at the annual AWP conference. That was not the case several years ago. A number of submissions arrive because someone had a conversation with Jody at AWP. One thing I decided about two years ago was to actively seek the submission of work from many well known writers.
That’s how we obtained work from Arthur Sze, Colleen J. McElroy and Terence Winch, and published it in our last issue (Spring /Summer 2015); also in this issue one will find the poetry of Rira Abbasi translated by Maryam Ala Amjadi. Maryam and I were social media friends and I suggested her name to our translation editor Suzanne Zweizig.
In terms of themes, one can read the submissions and conclude that quality healthcare in America will continue to be a serious issue. There are many poems submitted about cancer and elderly parents suffering from dementia.

SF: Poet Lore has a long tradition of  publishing translations. How do you see the journal contributing to  international, global dialogue?

EM: There was a period where we were not publishing translations. As you can see from our masthead we now have a Translation editor: Suzanne Zweizig. Her work and contribution to Poet Lore’s success has been exceptional. One thing we all agree on is that we want to move beyond just having European languages represented in our journal. I think it’s important not to simply think of Poet Lore as the oldest poetry journal in America but also as an international publication bridging diverse cultural communities together. I think it’s important to have someone read the work of Rira Abbasi and not just think about Iran obtaining nuclear weapons. The translation of poetry can be the key to opening someone’s heart. It builds the foundation for loving in a common language.

SF: Roughly how many poetry submissions do you receive, and what percentage of submissions are accepted?

EM: This is type of questions that now plagues baseball.  Everyone wants numbers and stats. How many African Americans play for the New York Yankees? If I gave you a percentage what would it mean? Would a person look at the number of submissions accepted and decide not to submit?  We encourage everyone to send poems. Jody and I read manuscripts without keeping score. I like how Jody will often send a nice note of encouragement to a writer asking for additional work.

SF: How quickly are poets notified if their poem(s) are accepted or rejected?

EM: This is a good question to ask Genevieve DeLeon our Managing Editor who runs the office located at The Writer’s Center in Bethesda.* One thing Jody and I will do prior to meeting (in person) is share the names of writers whose work we read. If there is a match and we both like a poem, then we can get back to that writer much quicker than most magazines. What has quickened the time of notification is that Jody and I exchange a considerable amount of electronic communication these days.

SF: Some literary journals are going entirely online, discontinuing their print editions. What are your thoughts on this, and do you ever see this happening with Poet Lore?

EM: I’ve always told people that Poet Lore represents tradition. I imagine somewhere there are people who never relinquish their fountain pens. As a baseball fan, I’m against the speeding up of the game and the instant replay. I want to be associated with a magazine that one can smell and touch. As the oldest poetry magazine in the U.S. we should uphold the printed page and respect it the way folks respect the documents created by our founders. For future scholars I think it’s important to have access to online magazines. But hey – I still would like to place Poet Lore magazines inside hotels and on airplanes. There will always be a difference between texting with one’s lover and actually sharing a hug or kiss.

SF: Poet Lore has been the first publication credit for some people who have submitted, and it also publishes well-established poets. Can you describe the selection process,
Do you and Jody sometimes have disagreements about which poems to accept, and how do you resolve them?

EM: Jody and I have never had a major disagreement about a poem. We read aloud every poem that we are thinking about accepting. We often tinker with stuff and send work back that has been submitted asking for changes and even explanations. We also have the “passion rule” which gives one editor the power to overrule the other. This is like a presidential veto one hopes to never use.

SF: What advice would you give to a poet seeking to publish poems or book reviews in Poet Lore?

EM: Read and subscribe to the magazine. Join our community even if your work has yet to be included in our pages. I think it’s important for young writers to write reviews. This is another way of improving one’s craft and gaining a wider appreciation of published poetry. I remember when Jean Nordhaus (our book review editor) reviewed one of my early books of poems for the Washington Review. Her words were insightful and critical.
I was happy to get the feedback and ecstatic that someone had not only taken the time to read my work, but also write about it.

SF: Who are some of the poets you’ve been reading recently?

EM: Maybe I should just answer that by looking at the books near my desk. There is a big pile. Here are two names: Abdul Ali and Kyle Dargan. I will be giving a talk this summer on the life and work of June Jordan – so soon I will be doing nothing but reading June’s poems as well as her essays. Well, let me mention that I love the poems that regularly appear in Sun magazine better than the ones in The New Yorker.

SF: You’re well known as a poet, memoirist, editor, and activist. Could you talk a bit about these aspects, and how they may complement each other?

EM:  I guess this is what Audre Lorde might call – my many selves. I think what’s missing but is central to what I do is that I’m African American and take pride in the promotion and preservation of African American culture. I see blackness not as a problem but as a gift – one that I must everyday share with the world.

SF: The current issue of Poet Lore has a portfolio of poems selected by Letras Latinas “PINTURA : PALABRA, a project in ekphrasis.” Are there other collaborative projects planned in the future?

EM: Like Starbucks, Poet Lore will continue to surprise its readers…

SF: Are there current writing projects you’re working on that you’d like to mention?

EM: Right now I’m working with Kirsten Porter (Marymount University) who is editing my Collected Poems for Willow Books. This book will be published in spring 2016. A few months ago I started “The Aldon Nielsen Project 2015.” It’s similar to the E-Channel that I undertook back in 2011 with the novelist Charles Johnson. I interviewed him every day for an entire year. I encourage everyone to pick-up a copy of The Words and Wisdom of Charles Johnson. Nothing like this has been done with a living writer. A couple of years ago there was a panel to discuss the E-Channel at the American Literature Association.
I consider Aldon Nielsen one of the major critics of African American poetry. I was curious as to his development from poet to critic. I’m sending questions to Aldon on a monthly basis – so the project is not as ambitious as the one I undertook with Johnson.
Still, I find it amazing and Big Fun.

SF: Thank you!
*Managing Editor Genevieve DeLeon: We do our very best to turnaround submissions—whether they are rejected or accepted—within 3 months.

E. Ethelbert Miller  is a literary activist. He is the board chairperson of the Institute for Policy Studies (IPS) and a board member of The Writer's Center. Miller and Jody Bolz are co-editors of Poet Lore magazine. He was director of the African American Resource Center at Howard University from 1974 to 2015. Mr. Miller is the former chair of the Humanities Council of Washington, D.C. and a former core faculty member of the Bennington Writing Seminars at Bennington College. He is editor of several anthologies, and author of several collections of poetry and prose, including Fathering Words: The Making of an African American Writer, The 5th Inning, and How We Sleep On The Nights We Don’t Make Love.

Posted by Jacqueline Jules at 5:00 PM No comments: